The big chicken drumstick chopped into bits had a mild scent of scallion oil; the tender and delicate chicken meat was not thin. When she bit into the chicken, she found that chewing it slowly is far more delicious experience than when she used to swallow it directly. 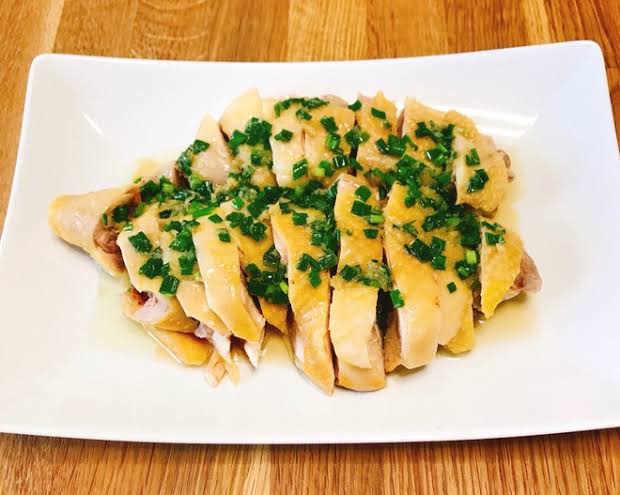 And when she placed the vinegar fish fillet inside her mouth, it was as if her tongue melted away. The intricate combination of a sweet and sour flavor, added with a bit of rice, made her squint her eyes in satisfaction.

And the two vegetable dishes, stir-fry Chinese cabbage followed by Gouqian bean curd…was also a fresh experience for her.

She ate mouthful after mouthful, earnestly and intently, evaluating the taste as if she were a bona fide food critic. Every time she chews, the delicious taste would be brought out from the rich seasoning.

She ate until there was only the last grain of rice and licked the corners of her mouth. She looked at her now empty lunch box with eyes still wide open. Then the watery pools looked towards the boxed lunch of the older brother photographer.

The older brother photographer was actually part of the live broadcast, shooting the highlights of her scene. Afterward, he would go back to the studio to edit her part for a variety show.

But at this moment, when her pleading eyes were looking at him, he unwillingly blushed with shame!

When the older brother photographer slowly pushed the egg flower soup that he had not touched towards her, the whole live broadcast channel immediately exploded!

[What a surprise! The rich and powerful wife is begging for food online!]

[Another surprise! Beautiful woman plays as a slag to look pitiful; it frightened the eldest brother photographer to the point he wants to pee himself!]

The scarlet letters that came in to lambast here, were immediately washed away with these new tides of comments.

Even many of Dajian’s fans of younger sisters and mothers couldn’t help but curiously comment on what happened.

Before long, however, there was a row in the live broadcast.

It was divided into two groups, one was ‘I am happy to cast her a vote for she is beautiful even when she eats and is poor’, and the other was ‘I will defend the first position of my beloved bean to the death; married aunt quit the live broadcast!’

Ni Yi, who was watching, looked at the noisy and chaotic live broadcast channel and watched the voting situation unfold with nervousness. He almost thought he had misread it.

With 88 votes, Yu Yaoyao is currently ranked fifth of all contestants!

Although there was a large gap between Yu Yaoyao and the top three contestants, namely, Meng Xinran, Qiu Dajian and Liu Xinxin, who all had received more than 10,000 votes, they were already 500 votes ahead from the sixth place.

Ni Yi was more than overjoyed and couldn’t believe it.

He didn’t believe that the anti-fans part of the audience in the live broadcast channel would actually bash her but then vote for her.

Then the more she gets scolded, the more votes she gets? These netizens aren’t that bad, ah! There are still five hours left. Sister, you must hold on! He clenched his fist, sending a silent message as he lingered nervously in the corridor.

At three o’clock in the afternoon inside the Shen residence.

Shen Rui the steamed bun, who had just been taken home by his babysitter, rushed back to his room immediately without even washing his small hands, to look at the big snake plushie who was coiled quietly on his cot.

He thought about this plushie for a day in the kindergarten, and only now when he saw that the serpent is still on his cot, did his tender little face show a bright smile.

He wanted to stretch out his hand to touch, then his eyes caught sight of his dirty little fingers, and he immediately retracted it back.

With a solemn expression, he ran quickly into the bathroom, stepping on the children’s bathing chair to squeeze out some hand sanitizer on the sink. It was as if it was a major thing–he washed his little hands with extreme carefulness, and even his nails were meticulously cleaned.

After washing, he placed his small hands in front of his nose and sniffed it cautiously. When he caught whiff of the sweet smell from his hands, his little head nodded with a satisfied smile. With his small mouth curved upwards, he rushed back to his room and jumped on his bed towards the serpent plushie. Held in a tight embrace, he carefully kissed it two times, unwilling to let it go!