Su Jishi sneered, clicked on the headline faster than a bolt of lightning and read the news!

Just as she expected, but certainly would have not believed before, there appeared many pictures of Su Jin in the news, including recent dazzling photoshoots and even photos of her first appearance in a TV drama.

However, whether if it’s from a magazine, a blockbuster film or a blurred photo taken by a passerby on their mobile phones, Su Jin always wore a very conspicuous necklace on her body—it was a strange dark green stone, irregular in shape, about half the length of a finger. A hole was made in the top of the stone and was tied up with a leather rope.

It hung on the girl’s long white neck, just between her collar bones.

The ugly stone can always be seen in every photo. And many people were speculating why the stone was so precious to the actress. In fact, some reporters have asked about it.

Su Jinqing said it was ‘a gift from a very important person for her 18th birthday’. Therefore, the news had blown it out of proportion and reported it on the same day that ‘Actress Su Jin was thankful when talking about her first love’.

There were also people who swore that it strongly resembles the expensive magical stones from Thailand that is rumored to make anyone who wore it beautiful in the eyes of other people! And as absurd as this may sound, some even went as far to suspect that once Su Jinqing would take off the jewel, she would turn into an ugly, old witch!

Bullsh*t! These people have brains the size of a pebble! Su Jishi internally exclaimed.

The dark stone, reflected under a strong light, would emit a green, exquisite hue, just like the color of the deepest well water.

It’s not an expensive gem…it’s just an impactite**.

Meteorites from outer space sometimes drop from the sky into the earth. When a meteor strikes a planet’s surface, the energy released from the impact would melt rock and soil into liquid and if the liquid cools and hardens quickly into a solid, an impactite is then formed.

**T/N: An example of a really pretty impactite necklace () 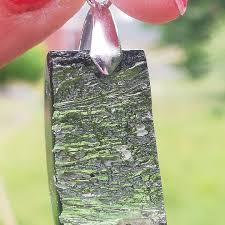 North America has the largest collection of impactites.

This shock-metamorphosed rock, polished into a pendant, was acquired by the 18-year-old Su Jishi after her first expedition into the wild.

It was just a souvenir she picked up and gave to her sister, Su Jinqing.

The pilot soon announced that the private plane will land in one hour.

Meanwhile, Fang Xie was still talking to the boss of the company.

“Leader Yang, I have long said this road is not feasible!” Fang Xie voice was high, “Su Jishi and Su Jin are two different people. Even if we put up with this pretense for a while, we won’t be able to hide it for a lifetime!”

There was a muffled voice on the other end of the line talking to Fang Xie, who was covering his red face with his free hand, in utter frustration and stress.

“Besides, Su Jishi won’t cooperate at all. And the fans are already waiting at the airport! As soon as Su Jishi goes out and grabs anyone nearby and spills them the truth, our company will be destroyed!”

There was a defeated sigh from the person on the other side of the phone.

Fang Xie shook his head repeatedly, “It’s really impossible. Su Jishi’s character is too iron-willed. They are the exact opposite! We can’t just put make-up on her, dress her up and push her onto the stage that easily!”

Fang Xie was getting bitter and exasperated by the minute, “She did not agree. What can I do?!”

He looked back and saw Su Jishi walking out of the bedroom. In the heat of the discussion, he didn’t notice that the woman had exited her room.

Donned in her dusty, field clothes but with the scarf held in her hands instead of being wrapped around the half of her face, her beautiful face was displayed for all to see. The backpack in her other hand was thrown to the ground sloppily, bringing forth a cloud of dust.

“Who said I didn’t agree?” She said, “Come here and make this old woman beautiful!”

Love War!! Save the Future!!

I Refuse To Be a Supporting Character