Chapter 18 – A Glimpse of the Missing Dove

Su Jishi just appeared in public twice, because her “fatness” made two headlines already. Moreover, she revealed her nature once and for all, and Su Jin’s pure flower image was put in jeopardy.

In this case, Fang Xie of course did not dare to release his human weapon again. He kept her at home and sent Xiao Xia to supervise her diet, let her slim down and try to make her exactly the same as Su Jinqing.

Su Jishi once read a report about how people on the Kyrgyzstan plateaus “**train eagles”. To put it bluntly, it is to forbid the arrogant eagle to eat or sleep and allow fatigue and hunger make it tamed and obedient.

The trainer must place a cap on the eagle’s head and keep it perched on his arm for hours without the bird falling asleep. This way it gets used to its future master 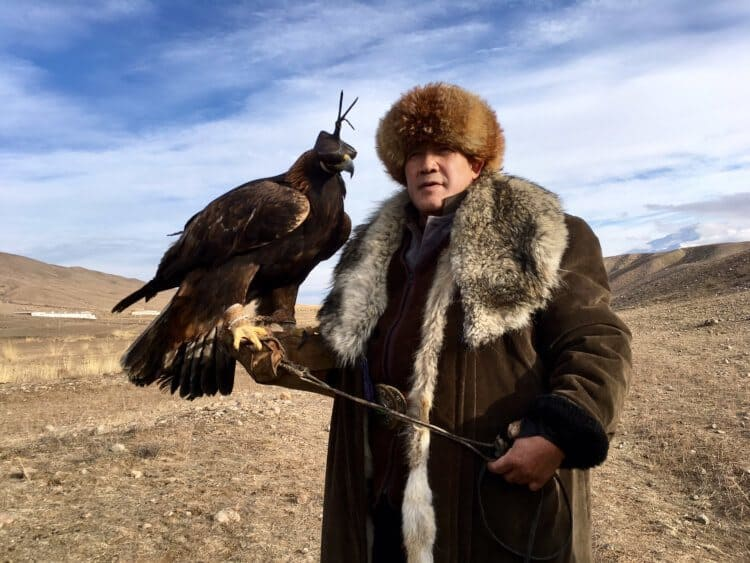 **T/N : A Kyrgyz hunter with his trained eagle

Su Jishi felt like an eagle that had been “trained”. She didn’t feel it, but her two eyeballs were shining brightly. She didn’t need to turn on the light in the room at night. She could see clearly what Xiao Xia was eating at a distance of at least five meters.

This day, the family downstairs was stewing black-bone chicken soup, and the smell drifted into Su Jishi’s nose despite the several obstructions. She smelled angelica, lily and lotus seeds. If she was a little lighter, she could float out the window and fly to someone else’s house to eat.

Xiao Xia saw her suffering so much, she could only find ways to divert her attention.

She dug out the variety shows and movies and TV dramas that Su Jin had participated in and asked her if she wanted to see these “good memories”.

She had always been very curious about her sister’s experience over the years. She had lived a simple campus for 28 years. She also wanted to see what the eccentric entertainment industry looks like.

Since her debut three and a half years ago, Su Jin’s agency was only a little-known small company. Fang Xie was still not a manager in those days, but a “talent scout” who strolled around the streets all day and stuffed business cards to pretty girls he saw. Because his behavior lovery obscene, he was always chased by the girl’s boyfriend.

At that time, Su Jinqing’s mother was terribly sick. When she was short of money, she worked several times and was always on the road. That was when she met Fang Xie.

He was so eager, and soon put the innocent and pure Su Jinqing onto false boat, changed her age, changed her name, gave her a new identity, and pushed her to the stage of the entertainment circle.

At the beginning of her career, because the company had no background, Su Jinqing could only play a few lines in local dramas. She also occasionally appeared on several variety shows, acted as a vase beauty and displayed advertising products …

When Su Jishi played a late night variety show which was famous, she saw the figure of Su Jinqing amongst the guests. As agreed, for the sake of giving entertainment, the show coerced the guests to play a little dodgeball game.

The girl was wearing light make-up, a loose T-shirt that didn’t fit, and clumsily followed other beautiful ladies to play dodgeball. Her long hair was braided into a thick black scorpion-like style, swaying behind her.

Unlike her active sister, Su Jinqing was not good at any sports and was frequently hit by the ball.

The last pitch though, the ball hit her head blatantly. She was caught off guard and slammed on her back with a loud bang. However, none of the female guests in the same group reached out to help her up. Instead, they chased the ball away with a few laughs.

It took half a minute for Su Jinqing to climb up from the ground alone.

Her hair was messed up and her collar slipped down her shoulder, revealing delicate skin and collarbone. The girl stood blankly, looking down at the palm of her hand that had been scratched against the ground.

The girl on the screen looked alone and turned into a corner while keeping up a smile. She watched the other girls have their fun, no one cared that she was not playing anymore.

Su Jishi subconsciously reached out and tried to wipe away Su Jinqing’s tears that did not exist. It was not until her fingertips touched the cold screen that she suddenly realized that the girl was not actually in front of her.

We Married to Divorce

Transmigration: Raising the Child of the Male Lead Boss

I Refuse To Be a Supporting Character